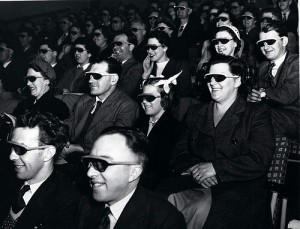 For a brief moment, it seemed that 3-D movies had nowhere to go but out of style.

That extra dimension meant higher ticket prices and higher expectations. And when it was tacked onto films shot in 2-D, audiences felt swindled.

Then, 2010’s box office results came in. Six out of the year’s top 10 grossing films — Toy Story 3, Alice in Wonderland, Despicable Me, Shrek Forever After, How To Train Your Dragon and Tangled — were featured in 3-D. While overall attendance was down, the extra cash moviegoers spent on 3-D films kept the box office afloat.

That’s not to say that 3-D still doesn’t have its detractors. In his subtly titled Newsweek article “Why I Hate 3-D (And You Should Too),” Roger Ebert offers a point by point takedown of 3-D filmmaking. He opens with the observation that movies are, you know, already filmed in three dimensions. He then goes on about the dimmer picture quality and nausea tied to 3-D movies.

Ebert also argues that it adds nothing to the experience, that “[a] great film completely engages our imaginations. What would Fargo gain in 3-D? Precious? Casablanca?”

A companion to that 2010 article was recently published on Ebert’s blog. In it, the film critic cites a letter he received from Walter Murch, “the most respected film editor and sound designer in the modern cinema,” as evidence that 3-D is an inherently flawed format.

Murch essentially validates all of Ebert’s gripes, closing the letter, “So: dark, small, stroby, headache inducing, alienating. And expensive. The question is: how long will it take people to realize and get fed up?”

Other voices in the 3-D discussion have changed their tune. A 2009 Slate article by Daniel Engber mentions headaches, nausea and visual fatigue among the problems with 3-D movies. Engber’s argument hinges on the fact that while there have been advancements in 3-D film technology since the format debuted and fizzled out, “[t]he essential mechanics of the medium—and its essential side effects—haven’t changed at all.”

Since then, though, Engber’s become more patient and tolerant of the medium. “I’ve grown accustomed to the ocular aerobics, and the same format that gave me splitting headaches back in 2009 hardly bothers me now,” he writes.

Engber’s also become less patient and tolerant of Ebert’s opinion. “I’ve had enough of this persnickety crusade, marching, as it does, under the banner of pseudoscience,” he writes.

But aside from simply adjusting to 3-D films, Engber believes the format can add emotional depth, as well as visual. He closes the piece with a reference to a scene from Toy Story 3, when one of the characters realizes he’s been replaced by another toy and is separated from the child he loves: “If the scene were flat, Lotso and Daisy would be right next to each other on the screen; in 3-D, they’re spread across a lonely chasm, separated by rain-streaked glass.”

Since more 3-D films are guaranteed to be coming soon, this argument probably won’t be settled in the immediate future. But, if 3-D films really are too much of a strain, there’s a brand new option: glasses that allow the viewer to see 3-D movies in 2-D.

Photo of 1950s movie theater courtesy of The National Archives UK via Flickr.