Hands-On Exhibits Bring Art and Food to the Green Fair 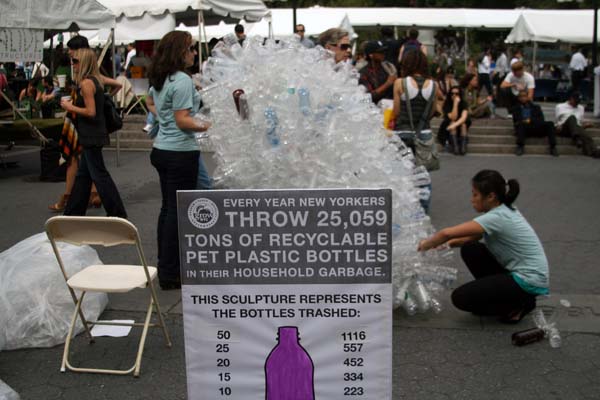 A recycled sculpture made from plastic bottles

Local food. Eco-chic. Recycled art. Sustainable living. If you walked through Union Square yesterday, you probably heard those phrases again and again. GrowNYC, the group that behind the city’s Greenmarkets, presented New Green City, an annual fair that showcases “government agencies, non-profits, entrepreneurs and community & corporate partners at the forefront of environmental stewardship, education and awareness.” The event is one of many green expos in the city, but what I really liked about the fair was that it offered hands-on exhibits. 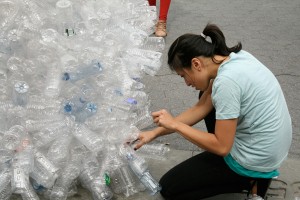 Layman Lee adds to the sculpture

GrowNYC’s Recycling Outreach and Education office took over a chunk of the plaza near 14th Street with a growing sculpture created from plastic water bottles they collected a couple weeks ago at the Susan G. Komen race in Central Park. The bottles added to the tower represented how many bottles New Yorkers throw away every second. “When we first decided to do this, we were pretty naive,” said Rebekah Sale as she passed out fliers about recycling. “We thought we would be showing how many bottles get thrown away every minute. But once we got the data [from the Department of Sanitation], we realized the numbers were much higher.”

Sale’s colleague Layman Lee added bottles to the structure as visitors suggested where it could be beefed up. “It’s been a lot of fun,” said Sale. “Everyone has been stopping to take pictures with it.” 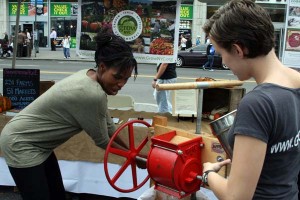 A few booths down, Chelsea Whittaker, a market manager with Greenmarket, taught people how to smash apples into cider using an old fashioned apple press. Whittaker would place sliced apples into a small compartment at the top, visitors cranked the large red wheel to grind the fruit, then they would twist the bar on top to press the juice from the apples. “Oh my god, this is hard!” said Aminata Diabate, straining to turn the wheel.

“We’ve gone through a whole crate of apples already,” said Whittaker. “This helps people get interested in the apples and the cider, which they can buy right over there in the market.”

Whittaker also sold apple cider doughnuts at her stand, which seemed to be the favorite kind of hands-on exhibit. It was definitely mine.