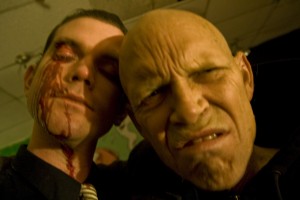 For those out of the loop, Sam Mickens is the lead singer of the Seattle avant-jazz trio The Dead Science. He’s a tall, formidable, but incredibly compassionate and talented performer. Though his main roll tends to be that of singer – in his new band, Sam Mickens’ Ecstatic Showband and Revue, he’s like a free jazz Lawrence Welk – his interest in performance art and theater led him to fabricate the complex and raw theater piece, Kayfabe: Game of Death.

Death By Audio, the DIY Brooklyn Venue, was turned into a full-on immersive performance space. It had armchairs on the actual stage and other seats lining the walls, facing in. The main concert space for viewers was turned into the performance area. Mickens imagined the space as a wrestling ring, using the narrative of a match and its participants as a framework for a moral tale of love and death – the duality of man sat at the forefront of the show’s themes.

Mickens got performers in from across the country (literally, across it: Portland, Oregon) for just a few days of rehearsal and only two shows. His brother, Noah Mickens, runs a circus out there. He came in to fill the roll of ringside announcer and provocateur. He also brought some of his circus cohorts to fill out the quickly made show. But the rough edges of the performance only emphasized the short timeframe the participatory

Performers got uncomfortably close, particularly the phenomenally in-character Alan Sutherland. He played the evil counterpart of the “game,” a Gollum-esque, spitting, hissing, enveloping source. His long, poetic monologues arrested the crowd, almost as much as the more shocking moments. These included a moment when Mickens punched Sutherland in the stomach, for real, until Sutherland asked him to stop.

It was an odd narrative, a mash-up of Philip K. Dick (for frankness) Strinberg and Brecht and Beckett (for breaking language apart and the embrace of absurdity) and Abramovic (for laying the physical self on the line for art).

I took two friends, women. They both ended up crying. (“That’s great!” Mickens intoned of this fact later). One wept because of laughter, one because of fear. Was it when Mickens cut his eyebrow with a giant knife, and didn’t wipe the blood away? Or was it when Laurel Jones, the resident midget, returned from offstage with two clear glasses of what appeared to be entrails? This was after Mickens (playing the Rev. Jim Jones, the “game’s” organizer) encouraged her to exorcise her cancer in the bathroom. Maybe it was the incredibly sad and unexpected on-stage murders (basically everyone died of poisoning or broken necks or stabbings). Maybe it was Mickens ladling Kool-Aid to viewers before the show, and then telling the entire crowd it was filled with poison. Whatever it was, it was art that acted on and illicited real, physical reactions.

And wondering about the name? Sam sent me this: 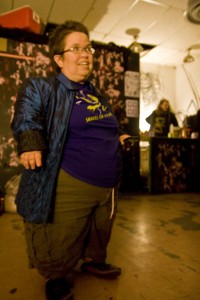 Laurel Jones, following her perfomance in Kayfabe: Game of Death. Photo (c) 2010 Dale W. EisingerAnd wondering about the name? Sam sent me this:

In professional wrestling, kayfabe (pronounced KAY-fayb; IPA:) refers to the portrayal of events within the industry as real, that is, the portrayal of professional wrestling as unstaged or worked. Referring to events or interviews as being a “work” means that the event/interview has been “kayfabed” or staged, and/or is part of a wrestling storyline while being passed off as legitimate. In relative terms, a wrestler breaking kayfabe during a show would be likened to an actor breaking character on camera.

Etymology: Thought to have originated as carny slang for “protecting the secrets of the business”; may ultimately originate from Pig Latin for “fake” (“ake-fay”) or the phrase “be fake.”

Keep an eye out for the name Sam Mickens – he lives in New York City now and I’m sure has plenty more planned.

1 Response to Sam Mickens Unleashes “Kayfabe: Game of Death” for Two-Night Only Show