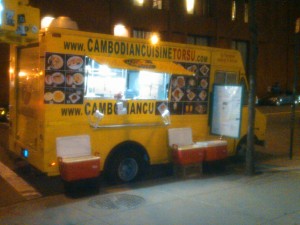 On the south side of Washington Square Park, you’ll see Cambodian Cuisine prominently written in green paint on the side of a new food truck. But on all the truck’s other sides, you’ll read “On the street looking to survive” painted on in a very pronounced red hue. The poster board attached just behind the truck’s passenger-side door explains why.

It all began in 2005 when Jerry Ley, owner of Cambodian Cuisine in Fort Greene, lost his lease due to rising real estate prices from the Atlantic Yards project. That year, Ley relocated to a building on East 93rd Street in Manhattan, but greater problems accompanied. A complicated three-year legal dispute between Ley and the new building’s landlord both delayed the opening of his new restaurant and led to its closing six months later.

Now, Ley said, he really is on the street looking to survive.

“It’s too much to bear,” he said. “I cannot stand still—I need to feed my family.”

But luckily for Ley, he has customers. Ian Head, a 10-year Fort Greene resident, said he stopped by Ley’s Fort Greene restaurant often to pick up his favorite tofu and vegetable dishes.

“I was bummed…because I have my places I go to eat, and that was one of my places,” he said. “As soon as I heard about this, I was, like, yes,” he said about Ley’s new mobile operation.

Ley’s new menu is a reduced one—there are only so many items he can make in his truck. But even limited, it contains an impressive spread of 17 noodle, fish, chicken, and tofu platters, all of which are inexpensively priced.

“The real estate’s nothing,” she said about Ley’s parking spot. “I think it’s quite smart.”