Is a Bomb Shelter in Washington Square Park Public Art or a Public Protest?

Posted on April 1, 2011 by melissa.nicolardi 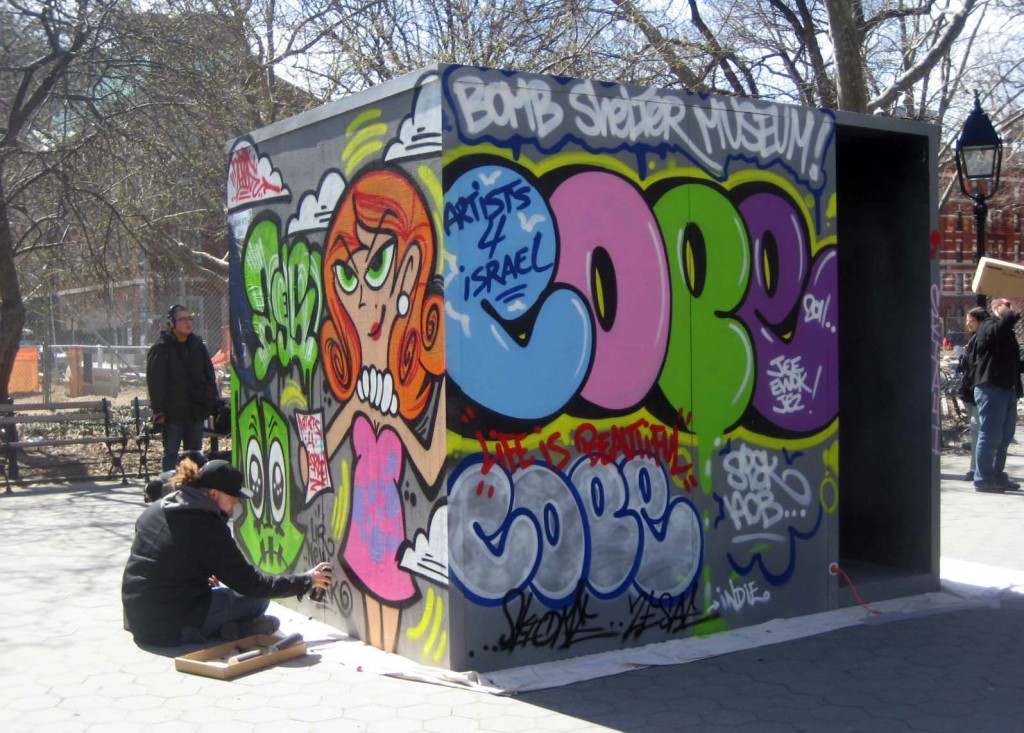 For a few hours on Monday afternoon, a corner of Washington Square Park became home to a controversial piece of art that either sparked a protest, or was the protest, depending on whom you ask.

The Bomb Shelter Museum, a multimedia installation by a collective called Artists 4 Israel, is a mock bomb shelter resembling those found in the Israeli border town Sderot. The exterior of the structure was “bombed” by well-known New York graffiti artists KA, 2ESAE, SKI, and COPE2 — all of whom are active with Artists 4 Israel. Inside the shelter, the sounds of a rocket attack fill the small space while a video of Israeli school children running for cover played on a loop. A member of Artists 4 Israel lead a performance in which at the sound of a siren, viewers had 15 seconds to get to the shelter from wherever they were in the square.

In a vacuum, or perhaps a gallery, the piece could’ve walked the line between political art and political protest.  However in a public space, such as the park, the balance becomes more precarious.

For the hour or so that I spent in the park, protesters (pro-Palestinian and pro-Israel) and media appeared to outnumber ordinary viewers. However, I managed to catch a few passerby and asked them to weigh in on whether or not the piece qualified as art.

Ashton Plajas, a street art aficionado, was impressed by the  graffiti writers who lent their names to the walls and called the piece “an amazing work of art.”

Sidhartha Sharma disagreed with the political content. He felt that the work, “trivialized a complicated issue,” but he still referred to the piece as art, adding, “you don’t realize the direction of the art until you go inside, it’s a little bit deceiving.”

Joe Lorwin, a writer and musician, couldn’t quite decide. “It’s not the type of art that I would make, or seek out, but I guess it is art.”  Then he wavered, “well maybe in this context it’s propaganda.”

Art and politics have often mingled, from the political satire of 19th century French artist Honoré Daumier, to the interactive work of Waafa Bilal, to the agitprop tactics of The Yes Men.   Earlier this week, a group of activists borrowed a song from pop culture to weigh in on the Israeli Arab conflict.

How many of these qualify as art? And who’s job is it to decide?